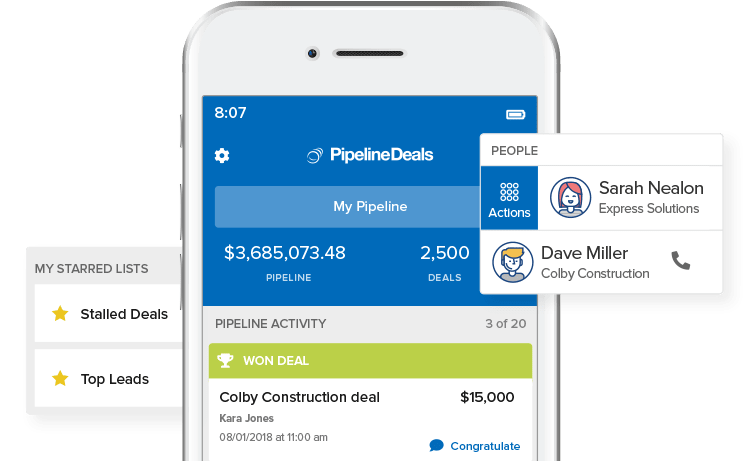 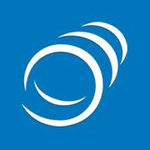 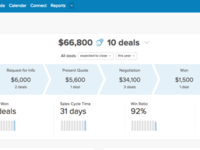 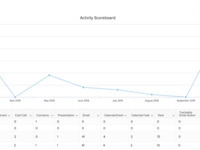 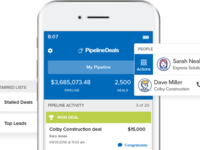 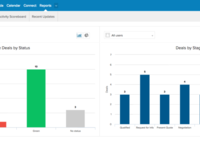 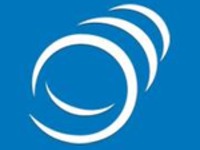 "Its not Salesforce, but it also won't bankrupt your small business"

Comentários: Overall, this was the solution my company needed. We had used Salesforce long before I was on staff, and it was too costly to keep using. When I was onboarded there was no CRM being used, and that had to change. Pipeline Deals gave us all the functionality we needed at a much much lower cost and barrier to entry.
Highly recommended.

Vantagens: This is a very powerful CRM solution. As I was looking for solutions I came across quite a few that were reviewed by many sites. Pipeline Deals consistently was in the top tier of CRMs for SMB companies.
I watched a few online demos and reviews before reaching out to their team. I was quickly assigned a representative that walked my team through a live demo and set us up with a POC trial. After our trial ended we signed up and were off. Setting up Pipeline Deals was quite easy, as the software can conform to your needs. Almost all fields are fully customizable, however this did take some getting used to, to see how changes were reflected as a whole in pipeline view. Overall, great product for a lot less than what Salesforce, Salesloft of Hubspot might run you.

Desvantagens: As a smaller company some of the integrations that other CRMs have were either missing or lacking. However, Pipeline Deals is getting better about innovation. One of my favorite shortcuts they rolled out was a LinkedIn plugin, this allowed for you to connect with somebody on linkedIn and in one click import them into your CRM. However, many times it would populate the fields with incorrect info or just generic info like where their company was headquartered instead of where that employee was actually located.
Additionally, at times the APIs for some of these newer services would change, and then the features would not work.

Comentários: My company has used Pipeline Deals since around the time they started. We were a very early customer. I started with one sales person and have moved up to about 10 today. The system works great for this size sales team. It's not cumbersome to use as a central system for a small team to stay organized. I highly recommend it to anyone with a sales force in that range. I can't speak to it's scale above that as its my experience up to 10 active reps. They have taken what was a massive set of things reps would need to do in some of the other online systems (lets call it OVERKILL) and boiled it down to activity, opportunities, and centralized performance measurement. Its got all the bells and whistles you need... while not overwhelming you (as the sales manager/owner) or your reps with tons of required extras that clutter their ability to move fast and keep selling.

Desvantagens: The actual "finished" reporting built-in for sales performance, historicals, trending, etc is lacking quite a bit as far as "management" type reporting goes [its almost all list based reports, no roll ups, etc... you can see everything, but its not presented in any customized executive way, reason I think it works well for smaller teams. But without better aggregation, I dont think it would be fun to manage 25+ reps on something like this]. (It can be done with outside graphing and custom tools using their API but not everyone can do that). Real-Time, Customizable, Formatted Reporting for "summary/trend management" would make this thing a 10 out of 10 !

"Sales in our office is all about Volume"

Comentários: The program is really not completely intuitive. This has not hurt us as our questions get answered whenever they arise by their support team. We are more successful with our business because of this program.

Vantagens: It could not be easier to load prospects. We signed up for a library card online. We select the type of businesses we want to pursue. We download spreadsheets of demographic information related to them. We upload those spreadsheets and start calling.

Desvantagens: I am certain that there are programs that provide more management tools. We simply are not that sophisticated with our sales efforts. If it is simply volume you seek, this is the right product. If you are looking for less effort and more management, pick again.

Hi Larry, thank you for writing a review. We value your feedback.

Comentários: I use it every day, and it gets the job done. I know the job could get done in a much better way if we migrated to something more powerful, but the thought of upending our entire sales process to new software seems like too much effort for the reward - for now at least.

Vantagens: Pipeline Deals is very straightforward and easy to use. The interface is able to be customized which is nice, and the ability to import and export data us useful for reporting.

Desvantagens: The core functionality of a CRM is pretty basic, it's just a database with a lot of custom variables (fields) associated to each entry. What makes a CRM powerful (or not) in my opinion is the ability for the software to integrate with other software in your business stack. This is the Achilles heel for Pipeline Deals, as the options for integrations are extremely limited.

Hi There, thank you for your review. We would love to speak with you about it to learn more. Please feel free to call us at 866-702-7303 or email [email protected]

"Have a sales team training with PipelineDeals"

Comentários: We used to be very messy what daunted future discrepancies in the company, thanks to PipelineDeals we have become an agile team that meets its daily activities and even constantly innovates in the area to always obtain the best results, also allows us to capture our I publish via email and track it in real time. We can optimize our sales strategies and customize the proposed activities based on the expectations of the company, in the same way it allows you to manage from your mobile application what becomes a point in favor as far as accessibility is concerned.

Vantagens: PipelineDeals has tools that allow us to customize and adapt our needs focused on sales and the service we offer, thus accelerating new opportunities and increasing the capacity to strengthen businesses. We can develop a reliable and successful database, we have a stable backup that allows us to be more objective with our campaigns. It is ideal when training our sales team, it gives us a wonderful user experience and is easy to use.

Desvantagens: These types of tools are usually quite uncomfortable when adapting them to the workday but PipelineDeals is quite easy and automatic configuration, classifying our activities and ensuring compliance with them. It has been a bit difficult to induce the program but its interface is friendly and has made the process quite simple.

Hi Elizabeth, thank you for taking the time to write a review. We are so happy to hear how we have so positively impacted your process!